Fly Fishing for Kokanee Salmon on the Gunnison River

Words and photos by Patrick Blackdale

Fly Fishing for Kokanee Salmon in Colorado: The kokanee salmon run on the Gunnison River is a great reason to plan a fall fly fishing vacation to Gunnison and Crested Butte.

History of the Gunnison Salmon Run

To fly anglers, the upper Gunnison Valley is a special place. It offers an abundance of stream access, excellent trout angling, and in the late summer and fall, the exciting kokanee salmon migration. Kokanee are a landlocked form of sockeye salmon that can only be found in a few places in the American West. Not native to the Gunnison area, kokanee were first stocked in Blue Mesa Reservoir in the 1960’s. Since their introduction, they have become a favorite among anglers for their strong fight, abundance and rather prehistoric appearance.

The life cycle of kokanee salmon in the upper Gunnison Valley begins on the East River at Roaring Judy Fish Hatchery. Juvenile salmon are raised from late fall through the winter and released as fry into the East River in April. In a matter of hours, the fry swim downstream some 30 miles to Blue Mesa Reservoir, where they will spend the next three to four years. During their time in Blue Mesa, they are a much-sought-after game fish for lake fishermen. When kokanee reach three to four years of age, they become sexually mature and their appearance changes from silvery and trout-like to tones of deep red and purple. Males will also develop an elongated jaw, known as a kype. It is at this age that the salmon will begin to migrate upstream to reproduce. 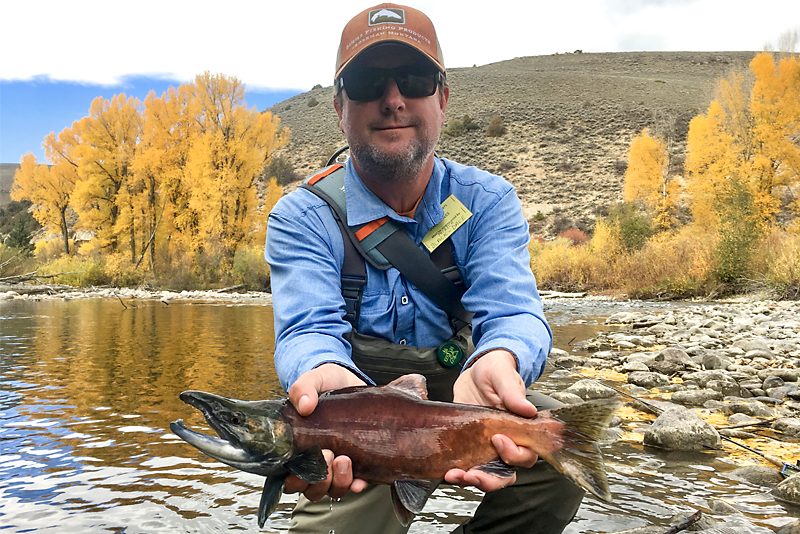 This annual migration typically occurs during September and October. A general rule is that the spawning run begins when the leaves begin to change color. It is estimated that over 20,000 fish participate in the spawning run each fall. Pods of salmon journey upstream to the Roaring Judy Hatchery on the East River. This 30-mile jaunt against the mighty Gunnison River is an ambitious pursuit. Predators such as eagles, bears and fox relish the opportunity to feast on these easy targets in the Gunnison and East Rivers. Salmon that avoid predators are also at risk of simply succumbing to exhaustion from the rigors of the migration. In death, those salmon that perish before reaching their birthplace will contribute valuable biomass to the ecosystem. Once at the hatchery, the salmon are diverted into raceways where workers can milk the fish manually, ensuring a high rate of reproduction. The fertilized eggs will be raised indoors in the safe confines of the hatchery until completing the cycle the following spring.

Diet and Behavior of Kokanee Salmon

Fly fishing for salmon on the upper Gunnison River can be productive from late August through the end of October. The exact timing differs each year, but mid-September is generally the run’s peak. Pods tend to hold in deep pools to recuperate before swimming upstream each night. Since spawning kokanee must conserve their energy to reach their upstream destination, it is thought that they do not actively feed. In fact, their digestive system essentially shuts down during the spawning run. So why would a kokanee salmon take a fly, you ask? Aggression is the answer agreed upon by most seasoned fishers. Similar to an angry bull charging the color red, spawning kokanee are likely to bite a gaudy attractor nymph in a fit of pre-spawn anger. 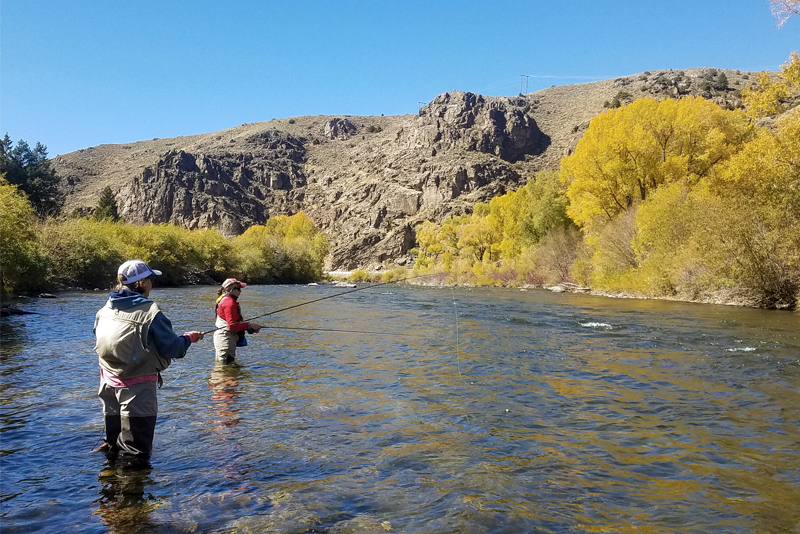 Technique and Tips for Fly Fishing for Kokanee Salmon

The details of rigging and fishing for kokanee salmon are simple. Tactics focus on respecting this impressive fish. Beefing up one’s tackle from standard trout fishing equipment is advised. A 9′ 6wt rod is ideal, paired with a 9′ 2x tapered leader. A standard tandem nymph rig with an indicator, split shot and two nymphs is customary. As for specific patterns, many anglers use attractors such as San Juan Worms, Globugs, and red Copper Johns. A small, drab-colored trailing nymph can also fool salmon and will also attract trout that lurk behind the salmon pod. We always recommend that you crimp your barbs to protect the resource. Employing a traditional dead-drift technique is vital to fooling these brick-red beauties. At any sign of the indicator stalling or twitching, a swift downstream hookset is in order. Fights should utilize low rod angles to quickly turn the fish and steer them efficiently towards the net. Keep photos quick and leave the fish in the water as much as possible. Releasing kokanee quickly ensures their successful return to reproduce.

Why Colorado’s Salmon Run is Special

Fly fishing for Colorado Kokanee Salmon is a marquee event in the Crested Butte and Gunnison area. Short of traveling to Alaska, there are not many places where anglers can experience a salmon run. In addition to accessibility, the impressive nature of these beautiful fish makes them a species worth the chase. Whether an angling novice or a seasoned veteran, fishing for kokanee salmon is an excellent way to enjoy a fall trip to Gunnison. Visit our fishing page to learn more about fishing in the Gunnison Valley.

Patrick is a fly-fishing guide and fly shop operator in Almont, CO.