Taylor Park, Colorado, offers a vast mountain playground managed by the US Forest Service for all types of recreational activities. Located on the west side of the Collegiate Peaks Wilderness, Taylor Canyon is home to Taylor Reservoir and the Taylor River. With options for traditional lodging or camping, it’s a great home base to spend a week during summer or fall.

Taylor Canyon is a fabulous spot for the water enthusiast. With great fishing, you can spend days trying different spots and catching more than your share of big fish. If whitewater is more your thing, local rafting outfitters can set you up for an exciting day of riding the rapids.

If you enjoy mountain biking, Taylor Park is famous as the home of Doctor Park Trail. It’s one of the best mountain bike descents in the world–a fast and furious 6 miles from the top all of the way down to the Taylor River below. If you’re into motorsports, explore the road less traveled by renting an ATV or Jeep. Hikers will find that the hiking in Taylor Canyon is second to none. Horseback riding and rock climbing are also popular things to do during the summer months. To fit everything in, you’ll want to plan on spending at least a week at Taylor Park. Or, you just may have to come back again!

The Taylor River has many distinct sections. The headwaters of the Taylor (above Taylor Reservoir) is a classic high alpine stream that meanders under majestic views of the Collegiate Peaks. The water is a small- to medium-size stream with ox bows, long riffles, runs and some nice pocket water. There are a large number of streams that feed the upper stretch and offer wonderful fishing opportunities.

The Taylor River between Taylor Park Dam and Almont offers approximately 12 miles of public water with easy access off County Road 742. The character of this section is technical fast pocket water with sporadic riffles and runs. The fast-moving water can make for difficult wading at levels above 250 c.f.s. Check the water level before you go. It’s also a good idea to call or stop in at a local fly-fishing outfitter to chat about conditions. 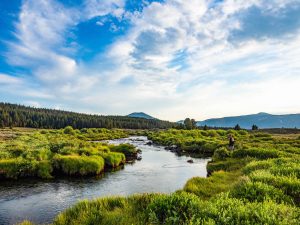 The most notable part of the Taylor is the .4 mile of water just below the dam. This section is host to some of the largest stream-born trout in the lower 48 states. Their large size is attributed to the tail-water from the dam providing a constant food source year-round, the bulk of which is the protein-rich Mysis shrimp. Catch-and-release regulations are in effect on this portion of the river and it is fishable year-round. Due to the enormous size of the fish (many over 10 pounds), this section also receives a lot of pressure, so be prepared for crowds. The fish are wise and wary. This can make for some difficult but very rewarding fishing.

The Taylor Park Dam regulates the flow of the river throughout the summer, giving the Taylor one of the longest boating seasons of any river in western Colorado. Commercial rafting companies run trips on the Taylor several times a day. Kayakers and private boaters are also a common sight.

Commercial rafting trips on the Taylor River take place below the dam on the “Upper,” “Middle” and “Lower” Taylor. The “Upper” Taylor section is rated Class III, while the “Middle” and “Lower” sections are more mellow. Taylor Canyon itself offers dramatic scenery unlike any you’ll find in the Gunnison Valley. High canyon walls and tall, dark green pine trees provide enough eye candy for even reluctant rafters. Rafting trips are also offered on the Gunnison River between Almont and Gunnison.

If you’re interested in captaining your own boat, some outfitters offer duckie trips with guides. These inflatable kayaks are more stable and great for beginning boaters. Rentals of equipment such as stand-up paddleboards (SUPs) are also available.

Cottonwood Pass is one of the quickest ways to access Taylor Park from outside the Gunnison Valley. The road is now paved all the way from Almont to Buena Vista. This high-altitude drive is windy and scenic. Watch for moose!

Many of the other roads around Taylor Canyon lead to some of the Gunnison Valley’s most scenic former mining towns: Pitkin, Ohio City and Tincup.

At an elevation of 9,242 feet, 28 miles northeast of Gunnison on the Quartz Creek, lies Pitkin, an 1880s mining town. Originally named Quartzville, after Quartz Creek which winds its way through the center of town, Pitkin was Colorado’s first mining camp west of the Continental Divide.

The town, which is situated on an alpine meadow, was incorporated on Aug. 11, 1879, when it was renamed Pitkin after Governor Frederick W. Pitkin. Continuous discovery of mines in the vicinity brought Pitkin to life and sustained it for many years. Today, a visit provides a real taste of the mining history of the area. Enjoy historic Victorian and Georgian architecture, with many of the original buildings still standing and in good repair. Hunting, fishing, hiking, motor sports and horseback riding adventures await.

Follow Quartz Creek along County Road 76 to Ohio City, traveling the scenic route of the old Denver and South Park Railroad line. Few mining towns had more demises and re-births than did Ohio City. Gold gave the town its start in the early 1860s and shut it down when it ran out. The silver boom of 1879 brought miners back until 1893 when the boom collapsed—and so did the town. In 1896, prospectors found the lode that was the source for the nuggets found in the ’60s and Ohio City was again re-born. Mining operations continued until about 1916.

Continue on County Road 765 (Cumberland Pass) in the non-winter months to the “wicked little town” of Tincup and learn about the colorful history of another great Western mining town. Books and information can be found at the General Store.

The Taylor Canyon offers plenty of great camping sites, ranging from developed campgrounds to wide spots in the road where you can pull off for primitive camping on some of the four-wheel-drive roads. In addition, two developed campgrounds exist along Taylor Reservoir, with several others located in other locations in Taylor Park. If camping isn’t your thing, but you still want to stay near the activities and fun of Taylor Canyon, our Almont lodging partners offer great options, including private cabins, rustic lodges and a dude ranch.

TRIP IDEAS TO GET YOU STARTED