Blog, Visit, Winter
As people who were once first-timers to Crested Butte in the winter, we know how overwhelming it can be to plan a trip somewhere new. There is a lot of information to take in and lots of decisions to make. So Laurel and I have teamed up to create a 4-part guide to planning a winter ski (or snowboard, if you must!) trip to Crested Butte.

Note that this guide isn’t necessarily for first-time skiers and snowboarders. It’s more designed for experienced folks who have just never taken a winter trip to Crested Butte and that’s who we were thinking of when we wrote about the trails and terrain on the mountain. The stuff related to where to stay and the scene should be useful for everyone though!This part 2 is all about where to find all the best little nuggets of terrain before the “Extreme Limits” open for the season (or on any given powder day). Part 1 was an overview of where to stay. We’ll roll out parts 3 and 4 over the next few weeks and fill you in on the scene and where to find the goods off the t-bars.

“The Extremes” at Crested Butte are a unique experience in the resort skiing world. Huge lines and steep slopes that are often either outside backcountry gates or permanently closed at other resorts, are avalanche-controlled and open to the public at Crested Butte. Openings are largely dependent on snowfall, avalanche conditions, and the amount of bootpacking that Ski Patrol can do before the really steep stuff opens.

Fortunately for us, and those of you coming for the early season, Crested Butte has plenty of lines outside of the traditional double-black zones to get a fix of steep skiing before the ropes drop on the T-Bars. Many of them are only rated single black, but don’t let that fool you. Tight trees, short steep pitches, and rocks will force you to stay light on your feet and focused on your lines. Be safe and smart if you decide to push yourself on these lines.

Paradise Bowl is THE intermediate zone at Crested Butte, but that doesn’t mean that a little exploration can’t uncover something that will give you the willies. The first place to start is the easiest to get to. Coming down to Paradise Express Lift from the Silver Queen Express there is a section of trees and chutes called Beaver Slides that drop down onto Ruby Road. This is a busy area since these two cat tracks/trails funnel a lot of traffic on the mountain. Don’t be sketchy and spot your exit before dropping onto Ruby Road.

Below Ruby Road there is another steep slope called Westwall that will get your blood pumping. If you scout out your line just right you can even find the cliff drops hidden in the woods.

On the skier’s right side of Paradise Bowl is one of the first true double-black runs to open. Tower 11 Chutes can be accessed from a short cat road on the skier’s right of Paradise Bowl. These Chutes have a rocky entrance that leads into a series of tight chutes to the left that you can pick and choose from. It is right under the lift line so it’s worth a quick chair lift scout before dropping in. Locals tip: Don’t ski fresh powder in Tower 11 Chutes. There’s a reason that no one has touched it, and that reason is rocks. Let the locals be your guides.

A little lower down and skier’s left of Paradise Lift is a particularly fun zone that is accessed off of Yellow Brick Road. Horseshoe and Horseshoe Springs don’t feature a ton of vertical feet but they will keep you on your toes. At the signed entrance Horseshoe Springs drops off to the skier’s left through the glades. Horseshoe proper is skier’s right off the ridge wherever looks good. It isn’t recommended to go all the way to the end of the ridge until much later in the season. That area is rarely filled in in the early-season because of its aspect and impressive collection of scree and talus. 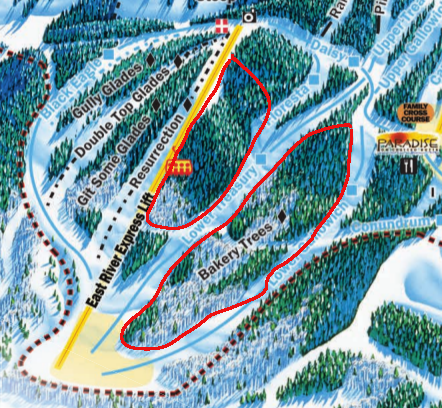 Two of the steepest early season glades can be accessed off of the East River Lift. The first is called Bakery Trees and it is the real deal for early-season skiing. The second is known locally as Resurrection Trees and it’s a little more difficult to find.

Bakery Trees is a treasure trove of tree skiing with many different lines throughout. It can be difficult for snowboarders because of the stairstep geology. These features make for a short hike of about 200 yards at the beginning to get to the top of the run. From here there a few more stairsteps that force you to keep your eyes and speed up so you don’t have to hike anything else. Skier’s right tends to be a bit friendlier since it is primarily an aspen grove and little more open. The middle and skier’s left can get very steep and tight, but that’s all part of the fun right?

Resurrection Trees are the glades to the skier’s left of Resurrection, Crested Butte’s classic lift-line mogul run. Start off on Resurrection and look for the road to the left just before the pitch drops off. Ski into the woods on some low-angle terrain just before the bottom drops out. From here the middle and right are your best bet for a warm-up, allowing you to bail to Resurrection at any time. Going skier’s left gets steep and very tight, eventually dropping you onto Lower Treasury. If you choose to ski right or center it is not recommended to ski past the second road that you come too. The trees below are riddled with spindly willows and the pitch is so slight that you will end up walking out.

As always, when you ski the trees, take a buddy and stay in visual/audio contact with them. We don’t get a lot of tree wells here, but it’s best to be safe and smart.

One other great early season run in the East River zone is the bumps on skier’s left of Resurrection. On a day with some fresh, nothing beats carving huge GS turns on the bumps, popping off moguls, and sending the cat tracks. It is the best early season workout because the runs take almost as long as the chair rides so your heart rate doesn’t really get a chance to slow down. 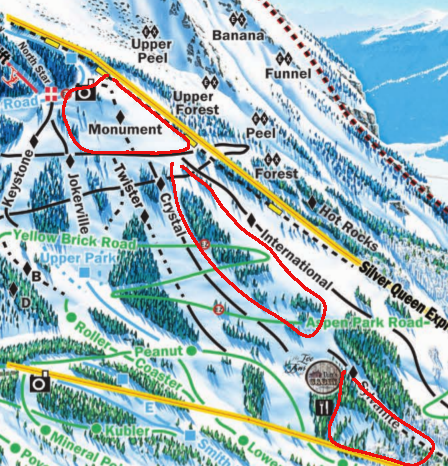 All of the Frontside runs are accessed by the Silver Queen, but you can also take Paradise and cut over on Ruby Road if you don’t mind missing out on some vertical. A word of warning, the Frontside is a fair bit rockier than the East River runs. Keep those feet light and look ahead to avoid putting a core-shot in your new skis or board.

Monument is the best place to start since the gate is just below the Silver Queen Chair. Monument is a truly great Crested Butte run. If you’ve ever seen a classic CB poster, it’s likely that the picture was taken on Monument. To find the gate you’ll have to ski/ride down to Windy Gap, the picturesque flat area before you take the Silver Queen Road or Keystone. Enter into run with a traverse to skier’s left. There is a fence down the middle of Monument that splits it into two parts. The skier’s right of the fence is mellower and a good choice for a first run through. Going to the left of the fence will put you into the wind-buffed chalky goodness that Monument is known for. Be careful at the exit since you’ll be dropping onto the busy Ruby Road trail and it can often be a little undercut and abrupt to a very flat landing.

From the Ruby Road trail you can continue the early-season goodness by dropping into the trees between Crystal and International. If you pay attention to the fall line and stay to the right you can score one of the best sets of glades on the whole mountain. These trees will eventually dump you out, if you did it right, just above Sylvanite. From here you can get one last bit of steepness before heading down to the lifts for more.

Psychedelic Rocks is the last bit of gnar that you can hit before the bottom. Surprisingly enough you can actually ski this line from the top of Red Lady lift. To reach these cliffs you will probably have to skate, unless you kept your speed up, the long cat road that marks the entrance to Sylvanite. About halfway through this skate look for a series of trails to your right. Ski out to the cliff line and scout your line. Several fun cliffs and chutes are scattered along this short ridgeline. Exit out on the Red Lady lift-line run to get back to the bottom.

With some of the best in-bounds skiing in the Lower 48, it’s easy to find something to ski or ride before our snowpack is at its deepest. Poke around and explore; we’re sure that you’ll find something to get the blood pumping even before the “Extremes” open completely.

This terrain may be closed by the ski area management at any time due to adverse conditions. Check with the ski patrol for information.This guide is no substitute for good judgment and expert skiing or snowboarding ability. The Gunnison-Crested Butte Tourism Association and the author(s) of this post accept no liability for any injury, loss, or damage which may arise from use of this guide.