The following editorial by Tourism and Prosperity Partnership communications manager Andrew Sandstrom is the third installment of a five-part series. In part 3 of this series on the Tourism and Prosperity Partnership (TAPP), we will focus on TAPP ‘s efforts to mitigate the impacts of greater visitation and the sustainable tourism aspects of our mission. 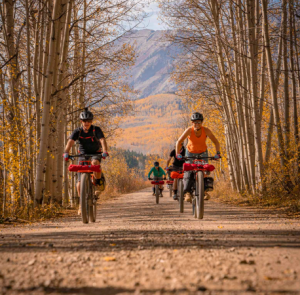 TAPP supported sustainable tourism even before it was added to our plate by the county commissioners. Annually, we give to Gunnison Trails, Crested Butte Mountain Bike Association, and the Crested Butte Conservation Corps.

When TAPP decided to go all-in on marketing trails, it became clear right away that we needed to update the trail’s infrastructure. We couldn’t invite people to use our system without the proper tools to navigate.

In 2015, TAPP secured a Colorado Parks and Wildlife (CPW) grant to bring trails and map signage to the whole Gunnison Valley. Via this grant, over a 5-year period, 16 kiosks have been installed at trailheads. These include a large valley-wide map, a trail etiquette message, and a smaller, more detailed map of each specific area. In addition to the large kiosks, nearly 100 locator signs have been installed at junctions and along trails. TAPP spearheaded the process which has involved the CPW, Bureau of Land Management, United States Forest Service, Crested Butte Mountain Bike Association, Gunnison Trails, and local ranchers.

While the CPW grant has been completed, TAPP ‘s work on signage kiosks isn’t finished. TAPP is funding ongoing signage projects at Signal Peak, Long Lake, and river signage that will be installed this spring. By giving visitors the tools to navigate our backcountry, not only will it improve their experience, but will also minimize the impacts on the lands that surround the valley.

The advent of the CBGTrails app has allowed TAPP to better understand the trail network in the Gunnison Valley. When TAPP began its efforts on trails, all maps available were incomplete. The addition of the trails game, TrailQuest, incentivized users to explore less traveled trails and record their tracks. Uploaded tracks improve not only the accuracy of the CBGTrails app but also any other app that uses the same open-source platform, OpenStreetMap. This will also help the Forest Service to better their maps which are currently in need of updates.

Last summer, TrailQuest expanded into non-mechanized trails and added Wilderness TrailQuest. Like the mountain bike version of the game, users only receive credit for unique miles. The original TrailQuest game confirmed that there are over 750 miles of mountain bike singletrack in the Gunnison Valley. The Wilderness TrailQuest game is expected to bring the total trail miles up to 1,200+. The games improve available maps while also spreading user impacts to some of the far-flung trails in the valley.

For wintertime recreation, TAPP partnered with Share the Slate and about a dozen other local entities in producing a winter layer for the CBGTrails app. Information on winter use can now be found in one spot. By making the rules clear, we give locals and visitors alike the opportunity to make the right decisions.

TAPP has been an active participant on the Sustainable Tourism and Outdoor Recreation Committee (STOR). We have worked to align STOR ‘s messaging with the projects that TAPP drove independently. STOR is now managing the projects that TAPP started. Even with greater resources in the form of funding, community participation, and national recognition, the STOR committee continues to see support from TAPP.

Tune in to the next installment of this series, when we will focus on TAPP ‘s efforts in the realm of economic development.

Andrew Sandstrom has worked as the Communications Director for the Gunnison-Crested Butte Tourism and Prosperity Partnership, formerly the Tourism Association, since January 2017.