Every year the leaves fall, the days grow short, and the snow piles high. It is usually time to bring out the skis and boards and ride the mountain or enjoy some of the best Nordic trails in the state. While times and technology have certainly changed, for the most part, the idea of sliding around on snow has remained the same, until now. 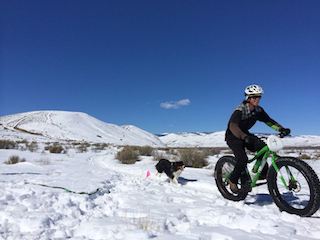 Fat biking was introduced in Alaska where people welded two, even three, rims together so they could ride bikes year round. One thing led to another and people saw the benefit of these bikes to travel safely from place to place. Ray Remolina designed the first fat bike to ride in sandy conditions in New Mexico. What started with one or two companies making these funny looking bikes has evolved into a huge sub-industry of mountain biking.

Today people use these bikes for recreation purposes year-round, on dirt, sand and snow. States such as Minnesota and Michigan have started to groom singletrack for riding pleasure. Out West, many Nordic organizations have compromised with local fat bikers, so much so that some are even renting bikes out to visitors. Locally, we may be a bit behind on the 8 ball as far as access goes, but we have gained significant ground.

This year, Crested Butte Nordic sent out surveys to all their pass holders, asking them where they thought fat bikers should be allowed. The people spoke and it was determined that that Town Ranch and Riverbend would be the current access—a small network of trails to the east of town that is typically free for Nordic skiers. A fat bike pass is $40 a year, or 5 dollars a day, for the use of this land.

We are lucky we have other groomed options including the public Recreation Path that runs from Crested Butte to Mt. Crested Butte, Crested Butte Mountain Resort, and CBMR’s North Village trails. Maybe some of the best riding is up the drainage roads such as Kebler, Slate, Washington Gulch, Brush Creek and Cement Creek. These conditions vary however and see plenty of snowmobile traffic. Another great option is riding the ski hill before or after the lifts close. Although steep in sections, you can guarantee a solid riding base. Down in Gunnison, Hartman Rocks Recreation Area is a great place to ride, whether you are riding the front-side singletrack or the roads. 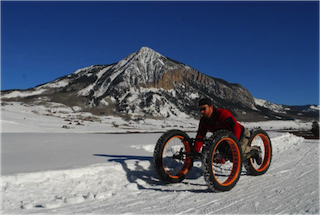 Our hope is to become just another user group that can access all the trails that Nordic skiers use. It is a great alternative to skiing, very low impact (less than skate skis), and a great way to see the valley. How cool is it to walk out your door, ride down the street, hop on the groomed track and head home. No taking your Nordic skis off and hopping in the car—it is efficient and fun! We also plan on building our own groomer with some of the money we make from our fat bike races this winter. 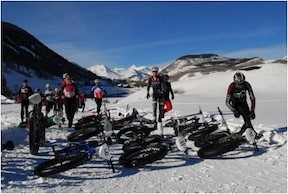 This winter Gunnison-Crested Butte Fat Bikers teamed up with Reeb Cycles and Oskar Blues to put on a fat bike races series dubed the Reebdonkadonk Fat Bike Race Series. Each race will be roughly 10-12 miles of groomed track.

The first race starts at 2 p.m. on Sunday, Dec. 21 at the Magic Meadows Groomed Track. The second race, The Winter Growler, is in Gunnison at 11 a.m. on Saturday, Jan. 3 at Hartman Rocks. Our third and final race, The Alley Loop Fat Bike Race, is held in conjunction with Crested Butte Nordic’s Alley Loop Nordic Marathon and starts at 3 p.m. on Friday, Feb. 5.

If you are not up for racing, we host group rides nearly every non-race weekend. These rides are fun whether you are a new or experienced fat biker. If you have yet to try a fat bike, we suggest to do yourself a favor. We will see you out there!

Neil Beltchenko (above) is the Co-Founder of the Crested Butte Fat Bike Race Series, not to mention a huge fat bike advocate. Neil lives in Crested Butte where he operates his online publication, Bikepackers Magazine. When Neil is not in the saddle, you will find him sipping on a pint at the brick oven or skiing bumps up on the mountain.

View all posts by Neil Beltchenko