Blog, Visit, Winter
Every year in February the town of Crested Butte turns itself into a cross-country race course complete with staging grounds, beer gardens, and lots and lots of costumes. Silly on the outside but serious on the inside, Crested Butte approaches what is now the state’s largest cross-country race with the same zeal and kookiness we reserve for all our best town festivals. Wax your skis and grab your funkiest wig – it’s the 30th Anniversary of the Alley Loop!

All winter the townspeople of Crested Butte spend countless hours removing snow from streets, alleys and sidewalks. Most years, there is so much snow it has to be loaded in dump trucks and hauled out of town. But, for 24 hours in February, we ask our public works crew to turn those trucks around. Come blizzard or sunshine, track must be set through alley and meadow as racers descend upon Crested Butte for the only in-town Nordic race of its kind. 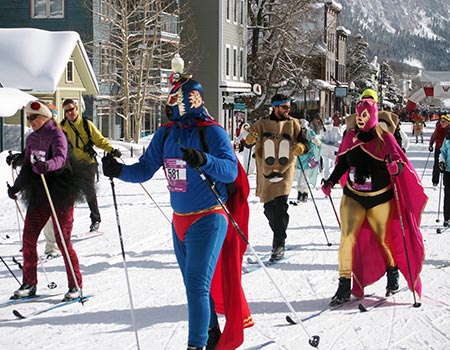 The inaugural Alley Loop took place on Valentine’s weekend in February, 1987. The call to action in that week’s edition of the Chronicle and Pilot was, “just show up at First and Elk on Sunday morning well before 11:00 am. Bring your best spirits and prepare to get high on skiing!” Thirty years later the message hasn’t changed. Long-time resident and perpetual event goer, Glo Cunningham, has participated for years and sums up the evolution well, “it’s one-third big deal and two-thirds Crested Butte fun.”

“I love the dichotomy of hooligans and serious athletes on the trail at the same time. The interaction is priceless, even when it’s not good  – but it mostly is!” laughs local artist and costume queen, Kate Seeley. Kate’s fondest memories are when the race has fallen on her birthday and friends have gathered to create extraordinary group costumes and celebrate on skis. Kate & company have won the Alley Loop’s Best Costume award three times in the last ten years.  First, as a herd of Spring Fairies sledding along a dear friend diagnosed with MS. Next, as a lounge of cigarette toting, martini drinking lizards (even though they really aren’t smokers). Last but not least, as a band of gnomes sitting on a garden wall. Kate claims half the fun is spending time with friends creating these elaborate costumes. 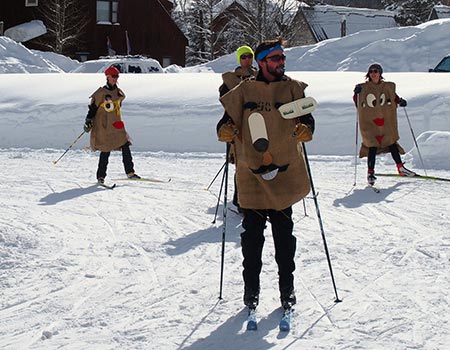 Preparing for an event of this magnitude always presents challenges and when you add Mother Nature to the cast of characters, you’ve really rolled the dice. Jerry Deverell reminisces about track setting in the Alley Loop’s early years, “The track setting wasn’t really elaborate. We didn’t have fancy machines. Maybe we rented a CAT from the ski area or they lent us one of their smaller ones to set the track and I think we broke it. Race day was panic several times because of things like that. Today, the equipment barn is better stocked and the event runs like a well-oiled machine. But don’t let appearances fool you, it takes monumental effort on the part of the Nordic Center to coordinate over 80 volunteers, more than 600 racers and a mess of locals who can’t access their alley for two days.

The Alley Loop is a signature piece of what it means to live in this crazy little valley at the end of the road – we get serious stuff done while not taking ourselves very seriously at all. It’s how we do things in Crested Butte and hopefully in 30 more years that doesn’t change a bit.

This piece is an excerpt from an article in the 2015-2016 Winter Edition of the Crested Butte Magazine.