Live Music 7 Nights a Week for the Whole Summer in Gunnison and Crested Butte, Colorado

With a show every night through the summer, Gunnison and Crested Butte is the valley to come enjoy the mountains and see live music in 2017.

The Alpenglow concert series at the Crested Butte Center for the Arts every Monday evening, June 19-August 14, 2017, is held on the outdoor stage and is free to the public. With names like the Wood Brothers on the docket, Monday is the new Friday night in Crested Butte.

Burgers and Brews at the IBar Ranch in Gunnison has the true Wild West feel. The stage is built in a hay barn, horse drawn carriage rides and camping are available on site. Burgers and Brews is every Tuesday from June 20-August 22, 2017.

Live! from Mt. Crested Butte is another free outdoor concert series held on the Red Lady Stage at the base of the Crested Butte Mountain Resort. Shows will be every Wednesday from June 28-August 16, 2017. 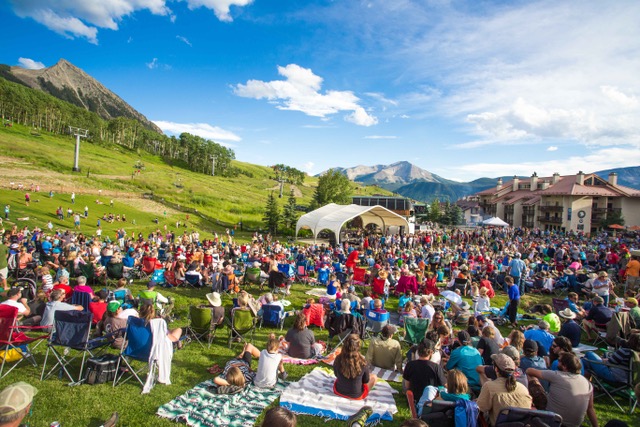 Sunday’s @ 6 in Legion Park in Gunnison will be held each week June 11-August 6, 2017. Free music at the park is the best way to wrap up the weekend. This family friendly event is a picnic style laid back concert series.

In addition to the weekly Alpenglow series, Crested Butte Center for the Arts has programming throughout the summer. Their 2017 Live Performance calendar includes classics like David Grisman and Del McCoury.

IBar Ranch fills its schedule with a Classic Colorado series that runs the gamut from country greats like Asleep at the Wheel to reggae classic the Wailers.

Just in case there wasn’t enough to fill the week, for the late night crowd, the Eldo Brewpub in Crested Butte and High Alpine Brewing in Gunnison both run live music most weekend nights through the summer. Both are great places for a lively night cap after a day exploring Gunnison and Crested Butte.