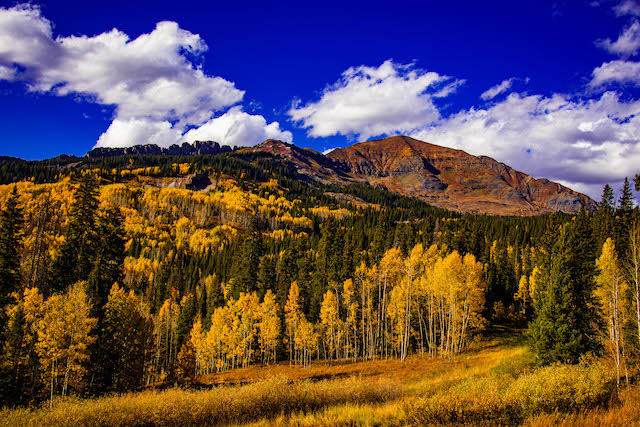 The vixen that showed up in our meadow six weeks ago is still hunting through the snow. She is acutely focused, pawing across the thin crust of snow, pausing, then pouncing head first in search of small animals still invisible to us. Her batting average is impressive.

The dogs, inside the house, bark wildly at her. We don’t let them out. They could never catch the fox, but they’d move her. And her kits need to eat.

The days have been warm. Some even in the 40’s. Cement Creek is opening up. Yesterday I walked down to a mostly-open pool. I spooked some brookies. I stood still. In a couple of minutes the trout returned to their positions, lazy tails keeping them in the slow pre-runoff current.

I may come back later with a rod.

This morning on Cement Creek Rd I saw a Golden Retriever I know, always happy for a pat and a kiss. His owner kept him away from me. It registered then that I could pass the virus onto the dog and then to the owner. Or vice-versa.

But the dog didn’t know. The dogs, the fox and the brook trout, they just go about their business.

We learned this morning that we are the most infected county, per capita, in the state. Testing being what it is we can’t take that statistic to the bank. But one fact is undeniable. Seven people have been hospitalized. Four are doing well. Two need watching. One was critical and sent to St Mary’s in Grand Junction.

And one neighbor has died.

We went Nordic skiing on Saturday. Climbed Mt Emmons on Sunday. We are being asked to take more caution in the backcountry than usual so that we don’t stretch the rescue community. We skied an easy line down through the Red Lady Glades. All safe.

I started Crime and Punishment. I love Dostoevsky and have read the tale of Raskolnikov’s terrible miscalculations a couple times. But I found self-isolating with Raskolnikov too disturbing and depressing.

Then I found Airplane on TV. I had forgotten what a great movie it is and how funny Kareem Abdul-Jabbar could be in his role of co-pilot. Airplane was what the doctor ordered!

View all posts by John Norton