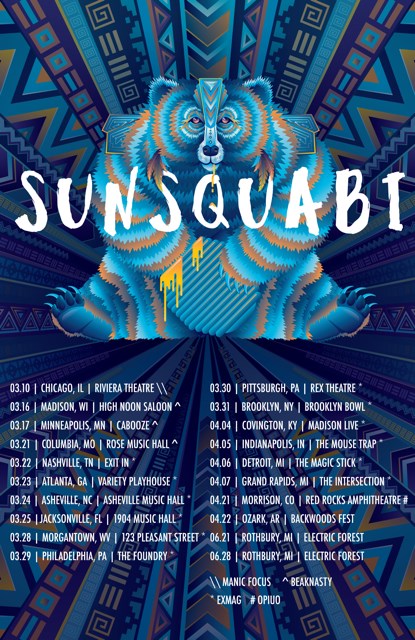 Dance/jam crossover act SunSquabi recently unveiled a fresh batch of tour dates. The band named the run the “Just A Little Tour” tour in honor of their 2017 release.

The Colorado-based live electronica experience hits the road starting next Thursday, February 8 at Animas City Theatre in Durango. Home state shows in Telluride, Crested Butte, Aspen and Steamboat Springs follow. Then, in March, SunSquabi opens for Manic Focus on the 10th in Chicago ahead of dates in Madison, Minneapolis, Columbia, Nashville, Atlanta, Asheville, Jacksonville and Morgantown.

SunSquabi next heads to Philadelphia, Pittsburgh and Brooklyn to close our March. In April, the group plays Covington, Indianapolis, Detroit and Grand Rapids before appearances at Mulberry Mountain and Red Rocks. Look for the band to perform at Electric Forest in June and more dates and festival sets to be confirmed in the months to come.