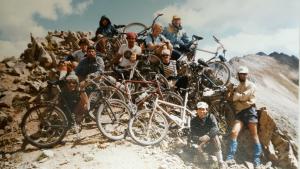 The 41th Annual Pearl Pass Tour to Aspen will be on the weekend of September 9th and 10th, 2017. If you would like to join the 41st Annual Tour please plan to be in Crested Butte that weekend!

We meet at the CB Mountain Heritage Museum at 8:30 am and the tours leave at 9:00 am sharp. If its the 2-day Klunker Tour you want plan to ride on Saturday September 9th, camp-out and ride to Aspen on Sunday the 10th. If you want to ride it in one-day, Sunday the 10th we ride all the way to Aspen!

Klunkers are the desired method of travel for the 2-day ride. There will be a self-supported Camp-out on Saturday Night. Beer will be provided by Wichita Brewing Company Wichitabrew.com.  The ride to Aspen over 12,705 ft Pearl Pass is on Sunday for both groups. We will shuttle folks home to Crested Butte Monday morning after celebrating and staying in Aspen Sunday night.  It is a 38 mile ride. Needless to say, make sure you are in top shape if you plan to ride this tour.

Some folks arrange to have friends or loved ones pick them up in Aspen. There is room for 12 ppl and bikes in the return van. Cost is $25.00 for the shuttle home to Crested Butte and $10.00 for gear to Aspen from Crested Butte.  Weather permitting; this tour will be cancelled if there is too much snow or rain!

Book your Sunday Aspen hotel rooms early and cancel them if you cannot go.

Email them at [email protected] for info

More about the tour by: Hank Barlow

The Pearl Pass Tour was a ridiculous idea. I mean you’ve got these guys out in California, or rather one guy out in California, Marin County to be exact, a guy who loved pushing his heavy as a rock bike up a steep hill then racing it back down at crazy speeds, back wheel way out to the side skidding like it’s leaving the party fast, the front wheel cocked over into the slide, and up on the saddle Charlie Kelly , doing a mad impression of an outrigger canoe surfing a big wave, and he’s up there on top of the show in total control.

Anyway this guy Charlie reads about this quote tour unquote over a pass between Crested Butte and Aspen and decides cool, let’s go ride that sucker, those are our kind of people! Right! Imagine the Wright brothers finally getting their plane to fly, not once but three times, for all of a minute the last flight. So later they’re sitting outside on crates drinking whiskey and celebrating their flight. They glance at the sky just as the moon appears from behind a cloud. They look at each other, one says yes, the other says let’s do it. As in they decide to try flying to the moon. That was Charlie and his gang from Marin County and their idea to quote ride unquote their bikes over Pearl Pass. I mean Pearl Pass was so far out of their comfort zone called Mt Tamalpais that they were barely even on the same planet. Didn’t matter. Sounded good to them so, unlike the Wright brothers who didn’t make it to the moon, they came to the Butte and then pushed and rode their way over the Pearl to Aspen.

It was all completely nuts. What happened was that the phone in town hall rung. Some guy in California wanting to know if the Pearl Pass Tour was happening or not. The call ended up being passed to Myles Rademan, he was in charge of tourism or something. Myles was probably sitting there for a moment like the deer in the car lights. There was no Pearl Pass bicycle tour. There wasn’t any Pearl Pass Tour of anything. Wait! Two years ago, those guys from the Grubstake took their bikes over Pearl Pass to Aspen. That’s what this guy is talking about!

Myles was a fast thinker, spotted an opportunity because in September the town was dead, so he goes, yea, it’s on, come on out. And with that a bike tour over Pearl Pass had to be organized for these guys coming in from California. Which meant, amongst lots of stuff, riders needed to be rounded up. Myles knew I had a road bike. Calls, asks me if I want to do this bike tour over Pearl Pass with these Californians. I’m like are you completely bonkers! Why in the hell would I want to push my road bike up to Pearl Pass then push it down the other side. No way. I knew what that road was like. On the Aspen side up high it’s basically just a boulder field with this sort of track that some four-wheel drives can negotiate, and only if their drivers are good and crazy enough to want to. Calling that a road is a massif distortion of the definition of road.

Crazy, just plain crazy. An idea that was totally impossible if anyone had sat down and given it some rational thought and considered all that was entailed. Fortunately no one did. Somehow a tour was put together, Charlie and crew showed as promised, and quickly understood that this was not a finished product. Then they took one look at the bikes those locals who had said yes were planning on taking over the pass. Oops, to the Californians these people might be brimming over with energy and good spirits but their bikes were disasters. Time to go to work.

Incredibly it all came together, the Pearl Pass Tour happened, and with that mountain biking had its second creation myth, the first being the Repack bike race on Mt. Tam. Every tribe in the world has their creation myths. Mountain bikers now had two beauties. Even better, the two creation myths had real live heroes, people who could be seen, touched, heard, read, and even ridden with, people like the already mentioned Charlie Kelly who wrote the definitive history of the sport and created, along with Denise Caramagno , the Fat Tire Flyer, the sport’s first journal; Joe Breeze who built the first by design run of mountain bikes and who famously said to Charlie and others something along the lines of well, that was fun, but who else would want to do this; ( Gary Zaphiris ) Gary Fisher, who wrote an article for Bicycling about Pearl Pass and went on to start the first mountain bike company with Charlie and Tom Ritchey; Wendy Wende Cragg , the original mountain bike photographer without whom so much of the sport’s history would have been visually lost. And on and on, too many to list.

The earthquake monitoring station in Golden must not have been working the 29th and 30th September, 1978 because no seismic event was registered. Then again even those standing on ground zero didn’t feel the ground shift either. But shift it did. The Pearl Pass Tour was, in my opinion, the transformative event that kicked mountain biking into high gear. Also massively transformative for the town of Crested Butte and for myself personally. A bunch of guys looking suspiciously like hippies riding bicycles over Pearl Pass was revolutionary in the world of cycling. Plus it happened in a visual environment that could shut up the busiest head and make eyes go all bleary from staring. All because of Charlie reading about a bunch of guys from Crested Butte riding over Pearl Pass to Aspen.

Cycling would never be the same. Kind of like shaking a walnut tree to get the nuts to fall but instead of just shaking the trunk, the Pearl Pass Tour ripped the entire tree out of the ground, held it upside down, knocked it silly to get all the nuts to fall out, then jammed it back in the ground leaving the world wondering what in the hell just happened.

And hardly a soul noticed. I know I sure didn’t. Maybe Charlie, Joe, and Gary had a faint suspicion of what just happened, maybe. But even if they did, the scale of what might have floated through the gray matter didn’t come close to what in fact transpired. But not immediately. Even avalanches start out slowly.

I relate all this because I think a lot of mountain bikers today, in fact maybe the huge majority, have no idea just how enormous an endeavor those first Pearl Pass Tours were. These guys, plus a few women, were pushing these rolling rocks up this crazy steep mountain at elevations that make even people who live in the Butte gasp for air. If Sisyphus had seen them, he would have thought that’s nuts, I’ll just stick with my rock thanks all the same. And then to really top it all off, the ride down the other side for a long ways was worse than the climb. We’re talking full-on boulder field, so rough jeeps crossed it slower than someone walking!

A fantastic creation myth, easily equal to, and in some respects surpassing, the original creation myth, the Repack Race. In short, anyone who loves mountain biking should, from time to time, raise a glass in toast to those early tours over Pearl Pass. Or maybe a few toasts. And then go ride the pass, just to see.