Did you know there are many events in Crested Butte and Gunnison? See live music, take an art class, volunteer, play trivia, watch (or participate in) a ski or bike race, and more! Check this calendar to see what’s going on. 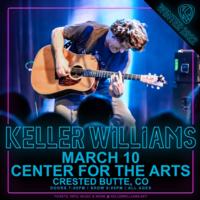 Join us Thursday, March 10 in the Steddy Theatre for Keller Williams! Keller’s albums reflect his pursuit to create music that sounds like nothing else. Un-beholden to conventionalism, he seamlessly crosses genre boundaries. The end product is music that encompasses rock, jazz, funk and bluegrass, and always keeps the audience on their feet. Keller built his reputation initially on his engaging live performances, no two of which are ever alike. For most of his career he has performed solo. His stage shows are rooted around Keller singing his compositions and choice cover songs, while accompanying himself on acoustic guitar, bass, guitar synthesizer and drum samples; a technique called live phrase sampling or “looping”. The end result often leans toward a hybrid of alternative folk and groovy electronica, a genre Keller jokingly calls “acoustic dance music” or ADM.”

Gunnison Valley is also host to several beloved annual events. A classic winter event is The Alley Loop, a Nordic ski race that doubles as a costume contest. In fall, Mt. Crested Butte hosts the famous Chili and Beer Festival. Every summer in Gunnison, a crowd gathers to watch America’s fourth-oldest rodeo, Cattlemen’s Days. There are also festivals in Crested Butte that celebrate local art, music, wildflowers, and more. Attending an annual event is a good way to connect with the culture of the Gunnison Valley. You might even create a new tradition for you and your family and friends!