Cut Chemist in concert at the Public House 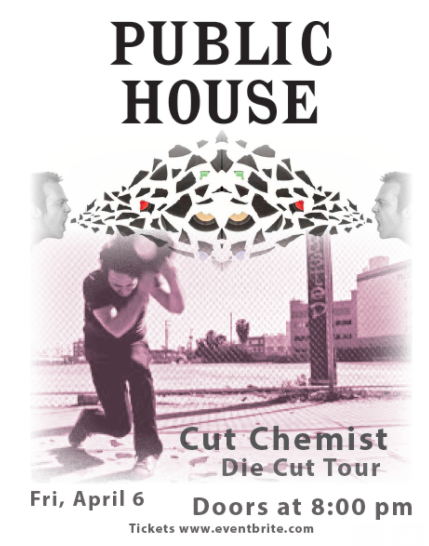 Cut Chemist has been recording and performing for nearly 30 years. He started djing in 1984, at age 11. In ’87, 14 year old Cut started recording with his friends including Chali 2na (Jurassic 5). Cut first became known as a founding member of both the rap groups, Jurassic 5 and the Grammy award winning Latin funk outfit, Ozomatli. Keeping his involvement with both groups in tandem with one another, Cut has developed a taste for music and rhythms from around the world while keeping his ethic for the hip hop tradition. His mix-tapes and remixes became critically acclaimed. His ‘Chemist’ moniker was fully realized with his instrumental, Lesson 6: The Lecture. A musical journey that challenged hip hop production with music theory ideals. Cut also found time to collaborate with DJ Shadow on what would be one of the world’s most sought after mix cd’s, Brainfreeze, soon to be followed by its sequel, Product Placement.
Eventually Cut left both Jurassic 5 and Ozomatli to pursue a solo career, starting with Warner Bros. where he landed his first solo LP, The Audience’s Listening in July, 2006. The title track was quickly placed for the first Worldwide Apple Nano commercial with Cut performing at all major US and European flagship Apple stores, while the single, “The Garden” became a favorite amongst tastemakers and the single “What’s The Altitude” became one of the most viewed videos on YouTube at the time.
Since then Cut has been back in the lab re-inventing his sound, he had the opportunity to remix of Nat King Cole’s “Day In Day Out,” Quantic and his Combo Barbaro’s “Un Canto mi Tierra,” and more recently Tune Yards’ “Gangsta.”
Cut ended 2010 with a new concept mix. Originally intended to be a one time performance for Mochilla‘s ‘Timeless’ concert series opening up for Ethiopia’s Mulatu Astatke in ’09, Sound of the Police, was different than any conventional DJ mix using two turntables, this offering was created live using only one turntable, a mixer, a loop pedal (for live sampling) and all original vinyl pressings. Cut thought when performing this mix live it would challenge the contemporary DJ as well as himself. The music chosen for this mix goes deeper into the crate than his other contributions. Driven by his passion for Ethiopian, Colombian, Sudanese and Afro-Brazilian sounds respectively, this mix also features a few classic tunes you might recognize. Sound Of The Police proves Cut Chemist is still pushing the envelope when it comes to live DJing and he still gives fans a piece of this challenging performance often at shows. “It’s like walking a sonic tight rope and the audience gets to see me fall if something goes wrong,” Cut says. “The interesting parts are when I mess up and fix it. The audience goes crazy and appreciates what a difficult balancing act this actually is…It’s important to widen peoples musical vocabulary and I feel its my job as a DJ to do so.”
Since October of 2017 Cut has made himself more available to fans with a bi-weekly radio program A Stable Sound on dublab / 99.1 FM KZUT (LA). For over 20 years, Cut has toured the globe searching for music. Now he wants to share that collection with the public. The show features different segments to tackle different genres such as cassette culture new wave and rap demos, deep funk 45s, world beats and even contemporary artists, celebration shows for the music to the likes of Bob James, Clyde Stubblefield and David Axelrod, live guests have included Egyptian Lover, Arthur Baker, The Beat Junkies, Gaslamp Killer, Edan, Biz Markie and more. “I’ve been missing the ‘party in a box’ feel of mix shows that used to exist 20 and 30 years ago like NYCs Red Alert show or the LA and Bay Area’s Wake Up Show. This is my chance to bring it back and share all the great music and talent I’ve run across over the years.”
Forward to the present, we are on the heels of the long-awaited follow up to Cut Chemist’s 2006 debut, The Audience’s Listening. “Whatever comes next you can expect the same ethic of artistic integrity” says Cut. “Hip Hop is not a specific type of music, its how its presented. I feel I’ve always proved that and will continue to do so.”