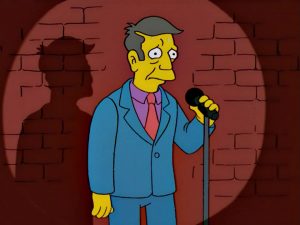 When Kay, a retired actress, meets Lou, a retired comedian, she invites him to move in with her at Sunset Terrace, a home for elderly entertainers. As their relationship blossoms, they argue over which is harder, stand-up comedy or serious drama. Mike Reiss, Emmy and Peabody Award winning writer for “The Simpsons”, has crafted a delightful comedy that explores themes of relationships, the performer’s hunger for recognition, and the challenges of growing old, with a script that is both intensely funny and deeply touching. Directed by William Spicer.

Join us for a “Talk Back” conversation with prolific writer Mike Reiss at the closing of the production on Friday, July 20th!