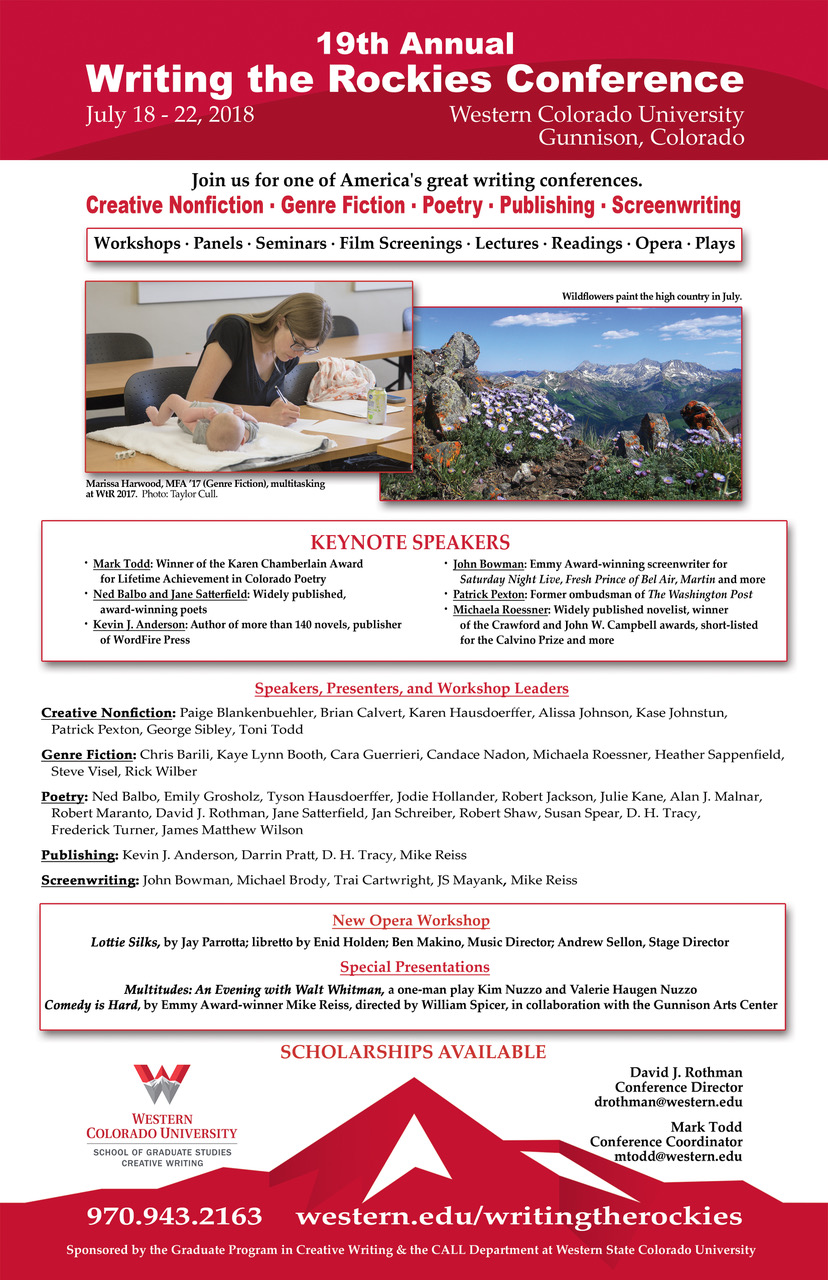 Now in its 19th year, Writing the Rockies (July 18 – 22, 2018) is one of the largest and most diverse writers’ conferences in the region, bringing together hundreds of writers and publishing professionals to celebrate the literary imagination and the written word in one of Colorado’s most beautiful high valleys.
Writing the Rockies 2018 will be one of the most memorable literary gatherings in the entire region, including far more events than can be listed here. Join us for five days of reading, writing, and conversation in one of America’s most beautiful summer valleys.
Set in the Gunnison Valley of southwest Colorado on the campus of Western State Colorado University, the conference is part of Western’s low-residency Graduate Program in Creative Writing and is also sponsored by the Department of Communication Arts, Language, and Literature.
The conference is fully open to the public.
Events at the conference correspond to Western’s Graduate Program tracks in Genre Fiction, Screenwriting, Poetry, and Publishing and include a wide range of workshops, lectures, seminars, readings, and film screenings that create an intense, collegial writers’ community across five days. There is also a track at the conference on Creative Nonfiction with an Emphasis on Writing about the Natural World, which is in development as a concentration within the Graduate Program as well, along with many special events, from plays to an opera workshop, alumni events, and more.
The general registration fee for all four days is an affordable $300 before July 1 ($350 after that date), and there are substantial general registration scholarships for Western students and faculty, K12 Educators, and Gunnison Valley full-time residents and anyone else who wishes to apply. In addition to attending the scores of general-admission events, participants can sign up for three-day workshops and manuscript reviews with visiting writers, publishers and agents for an additional fee.
Conference faculty and speakers are highly distinguished and have published in fiction, creative non-fiction, poetry, screenwriting, journalism, criticism, and scholarship, as well as having experience as editors, publishers, producers, actors, translators, teachers, and in other industry roles.
The opening conference keynote address will be given by Mark Todd, the founder of Western’s Graduate Program in Creative Writing, Professor of English at Western, and recent winner of the Karen Chamberlain Award for Lifetime Achievement in Colorado Poetry. Todd will address what it means to live “Writing from the Edge of Nowhere,” of which he says:
Writing and living in remote regions doesn’t mean writers are alone or even lonely. Under the umbrella of regionalism, we aspire to use the particular to explore the universal, just as any strong writer does. And our area has its share of denizens who hang their hats both regionally and even locally—not to mention the many authors, poets, and screenwriters who have passed through, wiping the mud from their boots and into the pages of their writing. Writing in and about the West is a culture by choice, a community without borders, and a confluence of literary imagination.
Screenwriting offerings include a keynote address by Emmy Award-winning screenwriter John Bowman, who has been writing and producing comedy for 25 years. He has written for Saturday Night Live, It’s Garry Shandling’s Show, Fresh Prince of Bel Air, In Living Color, Martin, Murphy Brown, and Frank TV, among others. He created Martin and received two NAACP Awards and a People’s Choice Award for his work there. He is currently a trustee of The Harvard Lampoon. In 2008 he received a PEN USA First Amendment Award for his leadership in the 2008 Writer’s Strike. He teaches screenwriting in the School of Cinematic Arts at the University of Southern California. Illustrating some of the connections between art and life, his screening will be about “Clapter”, which he defines as:

…​what a satirist gets when an audience agrees with the political point, but doesn’t think what is presented is necessarily funny. This screening will include sketches from Saturday Night Live, In Living Color and other shows on which I have worked, to examine some of the tensions between a writer’s political beliefs and the need to entertain. The underlying point is that the best sketches illuminate a politician’s character, as opposed to his or her ideas. We will also explore how actors can change the perception of the politician they are portraying. Amy Poehler presented Hillary Clinton as a smart woman with a bit of warmth. Kate McKinnon portrayed Hillary as a woman hollowed out by her lifelong political ambitions. Did this cost Hillary 70,000 votes in PA, MI, and WI?

The conference will also present a screening of the television special How Murray Saved Christmas, written by last year’s screenwriting keynote speaker, Mike Reiss. If you are a fan of animated comedy, chances are you have laughed at a joke written by Reiss, a four-time Emmy award-winning producer, a 28-year veteran of The Simpsonsand a contributor to more than two dozen animated films, including four Ice Agemovies, two Despicable Memovies, The Lorax, Rio, Kung Fu Panda 3, and The Simpsons Movie, with a total worldwide gross of more than $8 billion. He was the showrunner behind season four of The Simpsons, which Entertainment Weekly has called “the greatest season of the greatest show in history.” Mike has also written seventeen children’s books, including the best-seller How Murray Saved Christmasand the award-winning Late for School. In addition to his screening, Mike will be leading a one-day seminar on “The Surprisingly Nasty World of Children’s Books,” and his play Comedy Is Hard, directed by William Spicer, will be presented in its Colorado premiere at the Gunnison Arts Center during the conference (more details on tickets forthcoming).
The third screening will be a highlight reel from the Crested Butte Film Festival, presented by CB Film Festival Co-Director Michael Brody. For eight years, Michael and Jennifer Brody have directed the Crested Butte Film Festival, a four day celebration of narrative and documentary film. In that time, total attendance has jumped more than 150%. The festival is known for its challenging, provocative and international selections and has become a favorite of many filmmakers.
All film screenings take place in Western’s University Theater, a former first-run facility on Western’s campus. Other offerings in screenwriting also include seminars and courses taught by Western’s gifted, award-winning faculty, JS Mayank and Trai Cartwright, along with a panel presentation by Western Screenwriting MFA alumni Kaye Lynn Booth and Cole Claassen.
Offerings in Genre Fiction include a keynote address by Michaela Roessner, who serves as visiting Professor of Genre Fiction in Western’s Graduate Program in Creative Writing. Roessner has published four novels, as well as assorted short fiction and nonfiction in publications that include Asimov’s Magazine, The Magazine of Fantasy and Science Fiction, OMNI, Room,and anthologies that include Full Spectrum 2and Intersections. Her first novel, Walkabout Woman, won the Crawford and John W. Campbell awards. She has also had work short-listed for the Calvino Prize, the Tiptree Award, and the Millennium Publishing short fiction contest.
There is also a three-day genre fiction critical seminar with Rick Wilber, an award-winning writer, editor and teacher who has published more than forty short stories, several novels and short-story collections, two edited anthologies, a memoir, and a half-dozen college textbooks on writing and the mass media. Of Alien Morning, his new novel for Tor Books, award-winning science fiction and fantasy author Julie Czerneda says, “Brilliantly crafted, fiercely real, Alien Morningis first contact as it may very well happen: experienced by one, shared by all who subscribe. Relentless and original, this is science fiction that matters now.” There is also a one-day workshop with the widely published Heather Sappenfield, and workshops with Western faculty Roessnerand Candace Nadon, along with presentations by Western genre fiction MFA alumni Chris Barili, Kaye Lynn Booth, Cara Guerrieri, Steve Viseland more.
This year’s Poetry keynote speakers are Ned Balbo and Jane Satterfield. Gifted, prolific, and prize-winning poets and writers, the title of their joint talk is “Let Love Rule: Craft, Commitment, and Collaboration in Poetry and the Arts,” of which they say “As we struggle to find time to write and reflect amid the chaos that surrounds us, it’s easy to forget that the force which anchors our creative lives is the same one that connects us to each other: love.”

For the ninth year in a row, the poetry track of Writing the Rockies will include “The Critical Path,” a symposium on poetry criticism that features many nationally prominent poet/critics. The Symposium has been a great success, with papers often appearing in Western’s international journal of poetry, criticism, and reviews, THINK. This year’s symposium includes papers by Director Jan Schreiber, with Ned Balbo, Emily Grosholz, William Tyson Hausdoerffer, Symposium co-founder David J. Rothman, Jane Satterfield, Robert Shaw, D.H. Tracy and Frederick Turner.

In addition to the Symposium, the conference will offer a three-day poetry workshop on “Metrical Lines and Formal Wholes” led by widely published and award-winning poet and critic James Matthew Wilson, along with a three-day seminar for teachers on poetry pedagogy led by Robert Maranto, the 21st Century Chair in Leadership at the Department of Education Reform at the University of Arkansas, with Robert L. Jackson, the Chief Academic Officer at Great Hearts Academies. Other panels and one-day workshops include explorations of the long poem, small magazines, the ghazal, and the translation of Homer, with many of the Symposium poets participating, along with others such as Jodie Hollander, Julie Kane, Alan Malnar, Susan Spear, and many more.

In Publishing, the conference keynote is Kevin J. Anderson, Adjunct Professor in Western’s Certificate of Publishing. Anderson is the publisher of Colorado-based WordFire Press, a new-model publisher using innovative techniques and technologies to release books worldwide in print and eBooks. He is also the author of 140 novels, 56 of which have appeared on national or international bestseller lists; he has over 23 million books in print in thirty languages. Among many other projects, Anderson has co-authored fourteen books in the Dunesaga with Brian Herbert and over 50 books for LucasFilm in the Star Warsuniverse.

Other presenters in the publishing track include Darrin Pratt, Editor of the University of Colorado Press and immediate past president of the Association of American University Presses, D.H. Tracy, Editor of Antilever Press, and others.

This year marks the 4th Annual New Opera Workshop, featuring a heavily revised presentation of last year’s offering, Lottie Silks, with music by Jay Parrotta and libretto by Western Poetry and Genre Fiction student Enid Holden. The Music Director is again Ben Makino, who has served as Music Director at Opera Memphis, and the Stage Director is Andrew Sellon, a New York-based Equity actor and writer who teaches public speaking and performance in Western’s Graduate Program in Creative Writing.

For the second year in a row, the conference presents a one-man play on literary themes. This year the offering is Multitudes, a play by Kim Nuzzo and Valerie Haugen Nuzzo about the life of Walt Whitman in which Kim plays Whitman.

The conference will present the 3rd annual Writing the Rockies Lifetime Achievement Award for Excellence in the Teaching of Creative Writing (the only national award of its kind) to a recipient not yet announced.
Contact: