The Brevet in concert at the Public House 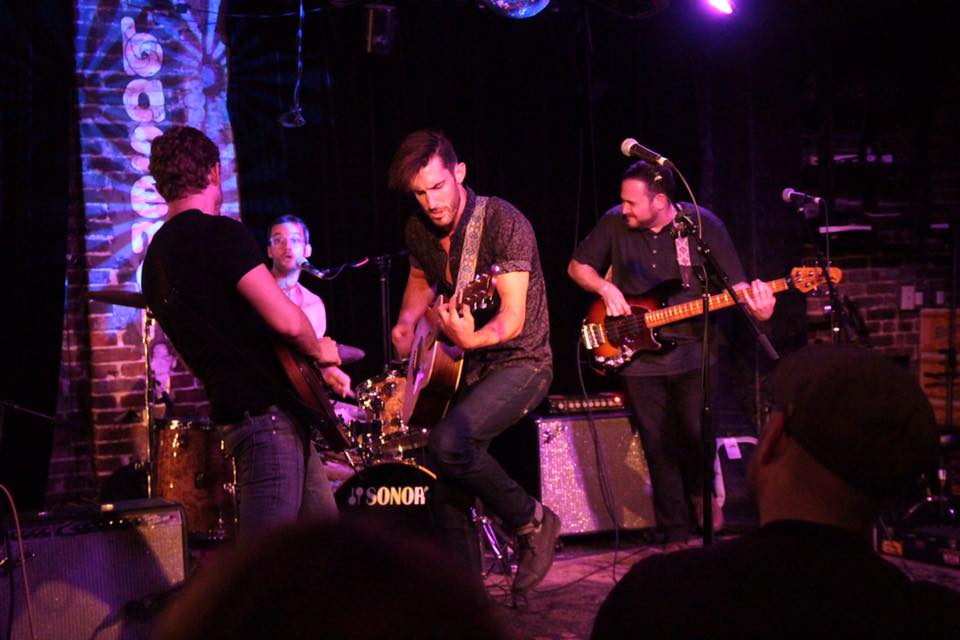 When the feedback-laden, distorted-as-all-hell guitar intro to The Brevet’s new single, “Locked & Loaded,” grinds to a crawl and lead singer Aric Chase Damm’s gritty vocals kick in, there’s a moment where—if you’ve got an ounce of soul in your body—your foot starts tapping almost involuntarily. The “woah-oh-oh” hook that hits next is the kind you feel in your bones, the eminently danceable kind that makes you want to shoot straight up, kick your chair back, and move. Every second “Locked & Loaded” begs for movement, an earworm that simply refuses to quit. And making the tune all the more impressive, in a testament to the group’s raw creativity and artistic ability, is the fact that The Brevet engineered and produced the track at the group’s recording space in Westminster, CA—where they’d also recorded their first two albums.
As the lead single off the band’s upcoming record, LEGS, “Locked & Loaded” performs a crucial task: Not only is it a representation of the band’s new sound and of what fans can expect from the forthcoming album; it is an indication of how far the band has come since their previous release, American Novel—a groundbreaking, highly acclaimed LP, released in a series of chapters.
American Novel, the group’s sophomore album, was preceded by the Brevet’s debut record, Battle of the Heart, and earned the band features and beaming reviews in such notable publications as Paste magazine, the Los Angeles Times, the Deli, Substream, OC Weekly, and many more. Per Substream’s Stephanie Roe: “There are just some moments in life that could use an extravagant soundtrack to make it feel complete. The Brevet are here to help you do just that.”
American Novel also opened the door for The Brevet in the form of some amazing opportunities: Songs from the record have been featured in movies like An Open Secret, The Good Lie, and Ashby; on TV shows such as Growing up Fisher, NCIS New Orleans, 90210, and even American Idol; and on TV networks like the MLB Network and the SEC Network (ESPN).
While the band has certainly enjoyed the exposure, as well as the accolades they’ve received from critics and fans alike, they’re particularly excited for the release of their upcoming single—because, to Damm, it sets the stage for a tighter, more mature, redefined Brevet. It represents a band who, having already achieved significant commercial success, is free to be as creative as they want, driving their music in a wholly new direction.
Damm, who helms the band as its primary creative force—though, of course, his fellow members contribute to the writing, engineering, and production process—says, of the band’s new sound:, that “Locked & Loaded”
We’re writing in a way we want to write now. I’m not trying to follow trends; I just want to write from my heart.”