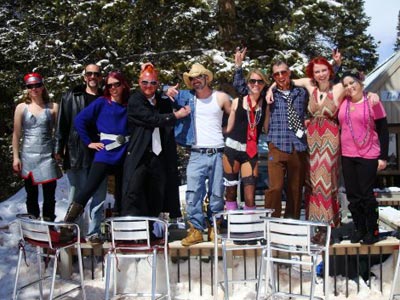 I had no idea when I moved to Crested Butte in 2008 and accepted a job bartending at the Ice Bar (formerly the twister warming house, now the classy Uley’s Cabin) that I was signing up to be at the epicenter of closing day. I just knew that I wanted to be able to ski to work every day and working outside would be a blast. But by closing weekend, I was dying my hair hot pink and “enhancing” a dress I had purchased at a thrift store with some spray on glitter. It was game on.

But closing weekend celebrations start well before that final day. In fact, they basically kicked off last weekend with the 41st Annual Al Johnson Uphill Downhill Telemark Race on March 22. Although it’s not actually on closing weekend, the “AJ” definitely gets the ball rolling on the shenanigans to come. Folks don costumes and telemark skis, even if that’s not their normally preferred way of sliding down snow, and race up to the North Face and then ski down. Complete with group costumes (my favorites so far have been the Price is Right a few years back or the Pac Man team in the photo below), carnage, and some competitive racing, it gets people out enjoying some great spring skiing and a lot of entertainment.

Then, on March 28th, the Crested Butte Chamber of Commerce will host the second annual CRAFTED festival, a celebration of Colorado beer, spirits, and food. This year, the festival has really grown with 14 breweries, 5 distilleries, and 6 artisan food providers. I’m looking forward to this nice complement to the fall Chili and Beer Festival, but during the winter at the top of the painter boy lift with views of snowy mountains all around. Next year’s CRAFTED festival will be March 26, 2016, so mark your calendar now.

As much fun as all of that will be, it can’t even touch the ridiculousness that we’ll experience closing weekend. Friday kicks off with the Flauschink Ball, an evening of polka and old school Crested Butte tradition at which the king and queen for the year will be crowned. Join the royal has beens and celebrate the coming of spring by dancing the night away.

On Saturday, the fun continues with the Annual Slush Huck and Pond Skim at the base of the ski area after the lifts stop spinning. I know other places do a pond skim competition, but I like to think our usual double pool makes it more challenging for the participants and more fun for the spectators. It’s fun to watch right along the rope line, but the Butte 66 deck is a great place to watch from above. The video team at Crested Butte Mountain Resort put together this great video last year featuring footage from the event. 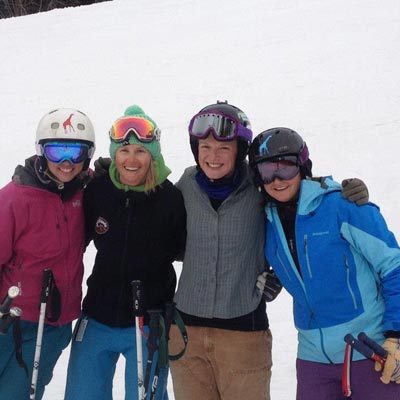 Finally, Sunday. Everyone gets out for one last ski day and then it all winds down at Flauschink hill above Uley’s with the biggest party of the winter season on the snow‚ think hundreds of people, with at least 25% in costume, wandering around and talking about their favorite runs and their off-season beach vacation plans. The year I worked the Ice Bar, we surprised the revelers with a performance of a choreographed dance to the Jackson Five’s little known Blame it on the Boogie on the bar top and deck railings.

Ski Patrol tends to let last call run a bit later than usual before closing down the bar and encouraging everyone to ski slowly and safely down to the base at the close of another great season. Most people are happy to oblige, if only to make the season last just a minute or two longer. And for those not completely exhausted from the fun they’ve had all weekend, they can continue the celebration at the Avalanche or down in the town of Crested Butte. One of my favorite closing weekends ended at django’s with a glass of wine and their famous brussels sprouts at 9:30 PM still in our ski boots.

If you’re looking for an incredible party the first weekend in April, Crested Butte’s closing weekend will not disappoint.