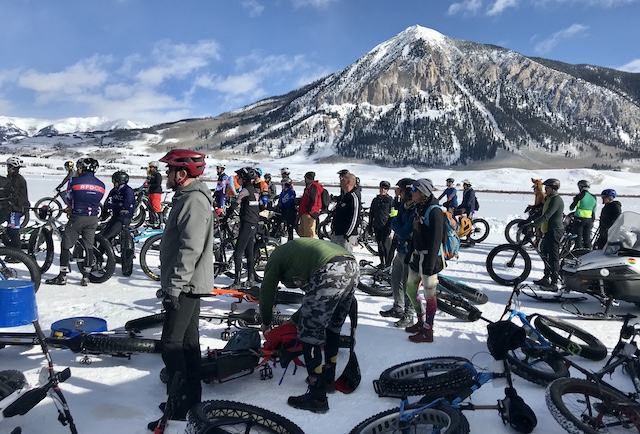 “I have a Borealis that would fit you like a glove!”

It was more of a dare than an offer from my boss two weeks in advance of the fifth annual Fat Bike World Championships in Crested Butte, Colorado. Up to that point, I had never even touched a fat bike, much less raced one.

Nonetheless, I took the bait.

After three miles of intense training and at least 20 minutes acquainting myself with the gears (which one is the easy button?) and the pedals (bought me some Chesters) and the dropper post (come again?) and the seat clamp (on backward), I arrived on race day with butterflies wider than the tires on my best-in-class, carbon fiber Crestone Eagle model from Borealis Fat Bikes–and a partner in crime. Much to my relief, a colleague also registered for Fat Bike Worlds on something of a lark. However, David had put in relatively much more training: four miles.

After about four hours of blood, sweat and beers, we learned a few things about this signature wintertime event that celebrates not only the sport of fat biking, but also the trails, scenery, and personalities found in this charming little mountain town at the end of the road. Here are but a few winners, losers and the race experience.

Fat Bike World Championships is something of a misnomer.

The event is not actually the Super Bowl of the sport. Don’t take it from me. “The race is a world championship in name only,” says Outside magazine, “as it’s not sanctioned by cycling’s international governing body.”

This does not mean, however, that elites do not seriously compete. As David and I neared completion of our second lap, we witnessed the overall winner claim first prize a mere 25 yards ahead of us as Josiah Middaugh crossed the finish line after completing his, um, fifth lap.

Bacon is underrated as endurance fuel.

I’ve participated in a fair share of trail-running races and road-cycling tours. But never have I seen an aid station quite like the Bacon Station on the course of Fat Bike Worlds.

If you’re gonna ride together, register for the same race.

On race day, Fat Bike Worlds offers a variety of races depending on age and ambition. The two main events are the 3-Lap Fun Race and the 5-Lap Championship Race. David signed up for the former; I, the latter. We learned of this discrepancy about four minutes before the race started. Which distance we would ultimately cover was a source of constant consternation.

I pedaled on to a DNF in the 5-Lap Championship Race, but not without pity from the race organizers for which I’m eternally grateful. As I completed my fourth and, um, final lap, I heard encouraging words on the P.A. and even some cheering. There was a checkered flag. And to my everlasting ebullience, I was awarded the ceremonial, coveted and regrettably empty Fat Bike Worlds finisher’s flask.

A 3-hour, 46-minute Did Not Finish didn’t hurt so bad after all. What did hurt? My bloody nose.

Soft snow can cause hard lessons.

The weather on race day was sublime. Bluebird skies. Temps in the 20s. Little wind until much later in the race. While that looks good on WeatherBug and all, the conditions allowed the snow on the course to soften in spots.

Soft snow, turns out, turns turning awful difficult. I found myself swerving and spinning at times, but at no point more nerve-wracking than a steep decline just before a steep incline. With a chorus of “On your left!” to my left and a bubbling creek to my right, I crashed my best-in-class, carbon fiber Crestone Eagle model from Borealis Fat Bikes and drove my head with great force directly into a bank of what was certainly not soft snow.

David would inform me five minutes later that I was bleeding from the nose. He broke out his medical kit.

David would inform me five minutes later that I was bleeding from the nose. He broke out his medical kit.

Or the costumes. For instance, the only longer DNF than mine on the 5-Lap was recorded by one of The Three Amigos. 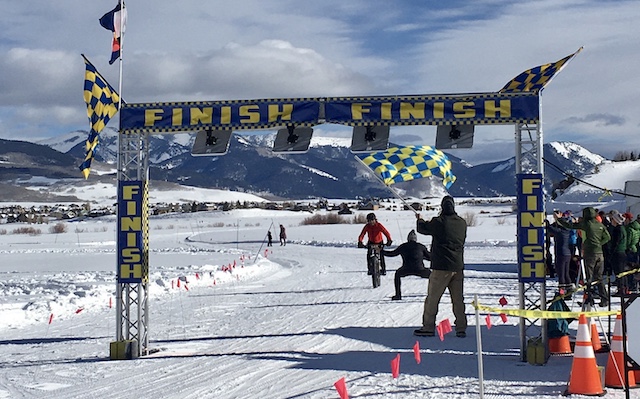 The author finishes the fourth lap of the 5-Lap Championship Race well beyond the cutoff time at the 2020 Fat Bike World Championships in Crested Butte. Race organizers send him a message by breaking out the checkered flag.